Author notes on the words and images in this year's card 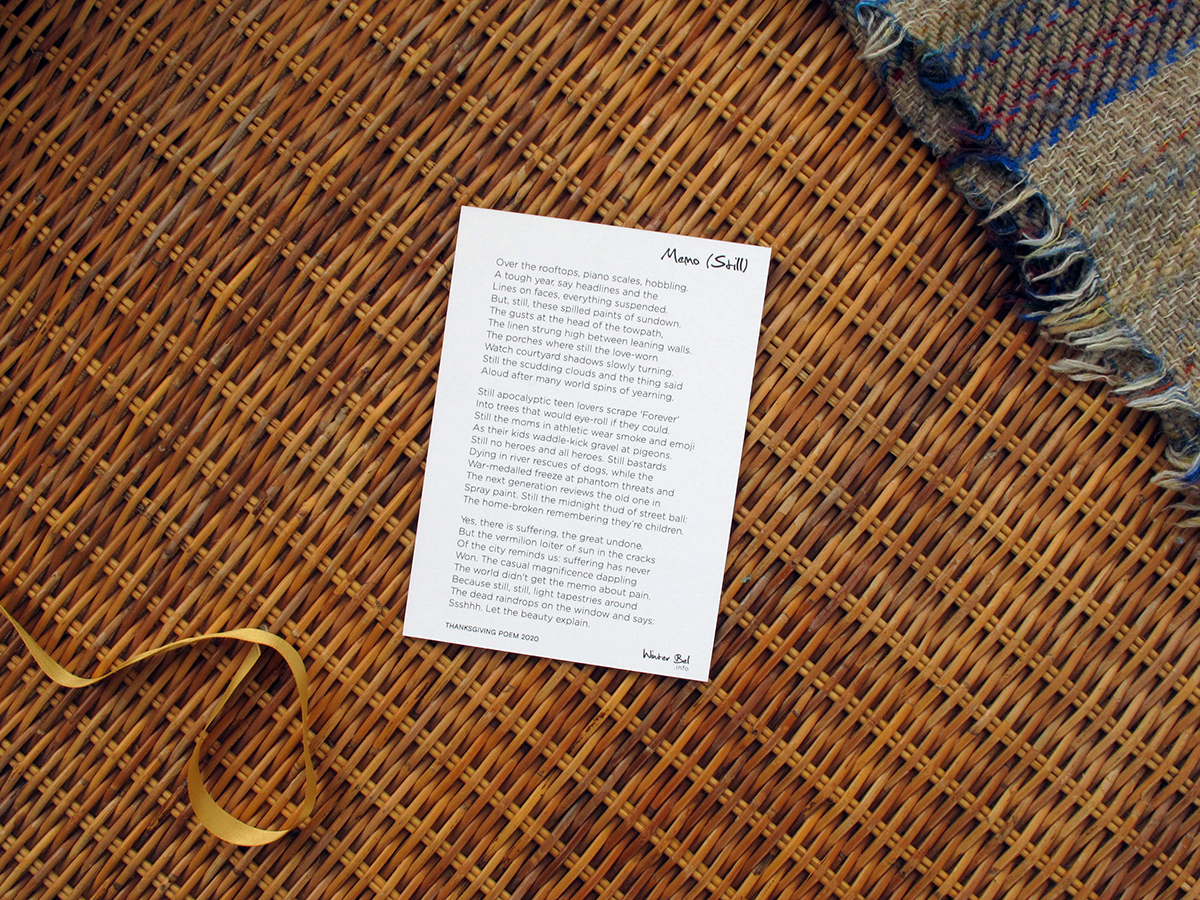 Year 2020: when life was what happened while you were pausing other plans

The experience of this year has, I think, been less monolithic than popularly acknowledged ("Honestly?" a friend said to me when we chanced on each other in the street. "It's been wonderful. I've seen my kids—I mean, really seen them—and remembered things I didn't know I'd forgotten. You're the first person I've said that out loud to, though. To bliss out in a pandemic seems, you know..."). Some people have been shut out from their happiest selves by the pandemic, while others have been reunited with them. All of these personal struggles or growths have played out amid a global clench of untimely death that has made many of us defensive or sheepish about being happy or unhappy. We're still alive, after all. What is surely true for everyone, though, is that this year has had impact. It's hard to imagine a person who has not been changed in some way by the brute force of collective standstill.

I hear talk of "life getting back to normal after the vaccine". Out of respect for the general frailty of hope right now, I nod along and swallow my comeback: that, in reality, normal life is always as cruel and capricious as this virus. Planes drop out of the sky, indifferent to the love stories and intellectual breakthroughs and parental hopes thereby stunted. Proud firsts to go to college see their intentions permanently severed from realization because a drug deal goes wrong outside their window. The good guy gets cancer, the bad guy gets the condo. A lifetime's work is lost in the fire, but a baby sock is spared.

That's life as it really is. But we have the luxury—in the developed world, at least—of forgetting it most of the time. We blueprint dreams onto days not yet lived and then rely on them like maps, even though they are as instantly collapsible as cobwebs. We use strident possessives like my wife and my son, as though other people are not merely lent to us on terms we won't know until they are revoked. We know nothing, and own nothing, and because that is existentially untenable, we use story-telling to build purpose, create territory, and adopt rhythm and register in our feelings. And in so doing, we have some of the greatest experiences possible as a human being. We love, we protect, we devise. The absurdity of thinking the future is obedient to us is more than offset by the glory of the things we do to convince ourselves it's true.

To me, the pandemic has been an affirmation of both of those things: the absurdity and the glory. If it's ridiculous to plan to propose under a particular peach tree in Crete on winter solstice, when the potential spouse or the money or the tree might be gone by then, it's even more ridiculous not to. The art, I figure, is to be flexible on the specifics. So it might become a proposal under parking lot lamplight with what belongings we grabbed, before the wild fire arrived, crushed up against the backseat window. I will accept that as the rewrite life handed back of the storyline I submitted. I will not resent the shortfall because the perfect version was never real anyway. Life isn't our flawless projections of it. In being less than that, it is so much more.

I have done almost none of what I had hoped to do this year. I have done instead things that would have looked like jackass doodles in my original plans for 2020. I have painstakingly annotated flight manuals in baby steps toward my pilot's license. I have learned how to dead-lift. I have realized how much better my life is when I hear my mother's voice every day. I have reconnected with Paris, where I happily drifted as a teenager. I have read scores of Pulitzer-Prize-winning novels and remembered that the written word is the highest calling, at least to me. I have created, but not what I thought I would. (In what might explain why I am particularly mindful of the intention-outcome gap in life, that often happens in creating, though.)

I don't regret a thing. I don't want you to, either.

Which brings me to...

"We must admit there will be music despite everything."

Before I came upon 'A Brief For The Defense' by Jack Gilbert, I would struggle to name "my favorite poem". I had many favorite lines, clipped from this poem and that, but an overall poem? Just one, that I would choose if I could only carry a single poem in my head for the rest of my life? I used to say William Ernest Henley's 'Invictus' because it's the Rage Against The Machine of poetry. But it wasn't until Jack Gilbert, a poet I encountered only in my thirties, that I had my real answer.

Jack Gilbert's 'A Brief For The Defense' opens:

Sorrow everywhere. Slaughter everywhere. If babies
are not starving someplace, they are starving
somewhere else. With flies in their nostrils.

So: this ain't the way to Disneyland, folks. The poem maintains this grim tone throughout as it observes the ubiquity of suffering, the shadow of death and deprivation cast inextricably by living. But I'm no disciple of misery and that's not the reason I love it. What grabbed me in 'A Brief' is the other reality it notes alongside the suffering:

There is laughter
every day in the terrible streets of Calcutta,
and the women laugh in the cages of Bombay.

It's true. There is laughter in cages. Laughter doesn't confine itself to places of plenty or of freedom. It doesn't wait for the sun to come up, or for rescue to arrive. People find ways to be happy, on the weakest of premises, just as plants will find the faintest chink of light and bend toward it. And by doing this—Gilbert calls it to "risk delight"—we properly honor the suffering in the world. To not be happy whenever and however we can is to become an accomplice in and champion of that suffering: "To make injustice the only / measure of our attention is to praise the Devil." The most noble response to the cruelty of life, Gilbert affirms, is to defy it — to "admit there will be music despite everything". (Read 'A Brief For The Defense' by Jack Gilbert in full here.)

For a long time, I've wanted to write something in the vein of Gilbert's poem. I suppose I've never found myself "in the ruthless / furnace of this world" quite enough to access the best words about suffering. I'm a first-world Millennial. "Sorrow everywhere. Slaughter everywhere" hasn't come and scraped at my door, but instead has been hologrammed into my living room as news reports and movie imitations. War is a video game. Starvation is an eating disorder. Wounds are foremost of the heart, and waiting room magazines have answers for them. What do I really know about suffering?

Giving thanks in the time of Covid

This year, I wanted my Thanksgiving message to center on continuation.

To be clear, I have not lost anyone to the virus, or suffered very much more, on the scale of things, than inconvenience. I hope the same is true for you. But the Johns Hopkins death maps on which countries across the world turn red, then orange, then red again, like malfunctioning stoplights, sent me back to Jack Gilbert: to paraphrase him, if patients are not dying someplace, they are dying somewhere else. For once, we can't simply turn off the TV and forget the ubiquity of suffering, because our fear of it is imprinted on every lived moment too: the children who can't visit, the smiles unseen behind masks, the six-feet reminders and the store admittance lanes that after a while make our bodies feel as dangerous as cars.

In a first for my generation, the future has asked for collective forbearance. I don't think my generation has the tools for this, I said to my mother, as the pandemic stretched on into summer. We're productivity, energy drinks, same-day delivery, and champions of a form of "following" that doesn't involve actual movement. We're low-tolerance go-getters. Sacrifice and holding still are not necessarily things we know how to do.

It remains to be seen if my generation will endure standstill less gracefully than older generations. We can only review how we did once it's over. The W.H.O. recently warned that young low-risk people likely will not get the vaccine until year 2022. If that timeline proves accurate, we are only one third of the way done. One third. And that assumes vaccination is a silver bullet. Forgive me, but the only silver bullet I believe in is a quarter dropping into a jukebox.

Coping strategems, then—sturdy ones that span months, not weeks—seem like a good idea at this point. This year's Thanksgiving poem captures one of the comforts I found in Paris this summer: nature, and the way it keeps on going about its business, and the tendency of people to keep on going about their business too, even in the worst of circumstances.

For the benefit of those I was not able to mail in time (or in these times), here is this year's Thanksgiving poem:

There are four variations for the front cover of the card this year. Here they are: 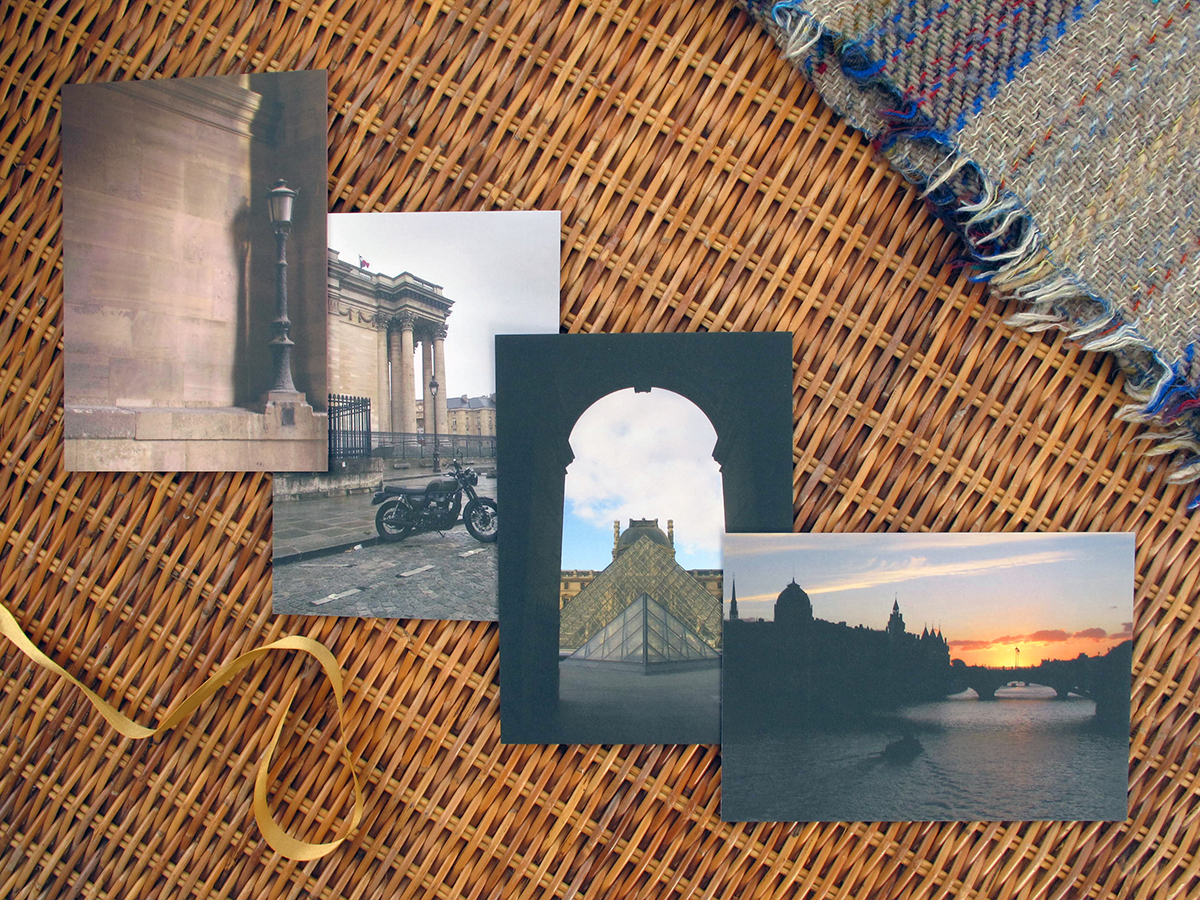 From top left to bottom right: a lamp in the Louvre Palace; a motorcycle outside the Pantheon; the Louvre Pyramid viewed from the Colonnade; a pleasure boat on the Seine, captured from the Pont d'Arcole. (All photography by the author in Paris in August 2020.)

In the Place des Vosges in August, I watched a toddler blow soap bubbles into the air, bubbles that flurried and flounced into the six-feet radii around passers-by as irrepressibly as, well, laughter. Heads turned, and dogs were set barking or capering after the transparent invaders, until they vaporized on the sidewalk or were stamped out by other children.

I think about that moment a lot now. The Capital-B-Big moments in life—graduation, promotion, and marriage, for example—may be subject to last-minute changes in the year to come. Some people, I understand, will feel cheated or demoralized as it becomes clear our hopes for the future were never promises from it. But small moments like a bubble outbreak in a park won't ever stop, just as a cage won't ever keep out laughter. Maybe the coming months are a chance not to miss out on those small things, for once.